New hope in the fight against cancer: A research team at the Fraunhofer Institute for Applied Optics and Precision Engineering IOF has worked closely with Varian Medical Systems (Fraunhofer IOF’s industrial partner) to develop a novel system for tumor radiotherapy, which improves cancer patients’ chances of recovery. The scientists behind the project were awarded the Joseph von Fraunhofer Prize for the overall system, which is ready for production.

When using radiotherapy to treat tumors, physicians harness the destructive power of the radiation to kill the cancer cells in a targeted manner, thereby contributing to the curing of cancer patients. The aim is to destroy the whole tumor region while minimizing damage to healthy tissue – a delicate balance that requires the utmost precision. The success of the treatment largely depends on this level of precision and so medical staff generate an accurate image of the tumor beforehand using radiation-based computed tomography and then plan the treatment using these scans. When the radiotherapy takes place a few days later, the patient must be in the exact same position as they were for the initial examination. This position must not change during the therapy.

The novel system developed by Fraunhofer researchers can continuously monitor the position of the patient both before and during radiation therapy. The chances of successful treatment and subsequent recovery are therefore significantly higher. In other words: it is a vital contribution to more effective cancer treatment that is gentler on the body. Dr. Peter Kühmstedt, Dr. Christoph Munkelt and Matthias Heinze from Fraunhofer IOF were awarded the 2022 Joseph von Fraunhofer Prize for the overall system, which was developed in collaboration with Varian Medical Systems and is productionready. What particularly stood out to the jury was the relief provided to cancer patients who undergo this treatment.

“The system produces 3D images of the patient before and during radiotherapy with an accuracy of less than half a millimeter and a high-frequency frame rate – that is unique,” emphasizes Munkelt. “This enables physicians to monitor the optimum alignment of the rays with minimum additional radiation exposure from imaging X-ray systems. Optical systems also allow for precise monitoring of patient positioning for highdose radiation with fewer treatment sessions. The treatments are very effective and also reduce physical and mental stress.” During the initial examination using computed tomography, an optical sensor  projects a variable infrared pattern – invisible to the human eye – onto the body, which is then recorded by two cameras. Patients, who are already under a lot of emotional stress due to their illness, are not additionally irritated by the light – another advantage. Based on these images, the system generates a 3D model that is later used to arrange the relevant body parts – an irradiated body area of approximately 30 x 30 cm – in exactly the same position as they were for the preliminary examination.

A further advantage here is that if the patient moves during treatment, either because they are breathing heavily or making compensatory movements, the irradiated body area consequently changes. In this respect, the system guarantees more safety: If the patient’s position changes, the system immediately registers this and turns the radiation off as a precaution. Going forward, smaller movements, e.g., due to breathing, can be adapted and the radiation adjusted live. Even more challenging radiation therapies for tumors that are difficult to trace, such as those in the abdominal region, should become possible in the future.

The team of researchers had to overcome numerous challenges for this development. “The focus of the development was transferring the entire package as a methodology into an industrial solution and designing a sensor network,” explains Heinze. In the long term, the world market leader Varian Medical Systems expects the novel system to be distributed around the globe for patient position monitoring.

Since 1978, the Fraunhofer-Gesellschaft has awarded annual prizes to its employees for outstanding scientific achievements that solve practical problems.

This year, three prizes were awarded, each worth 50,000 euros. The prizewinners also received a silver pin featuring the profile of Joseph von Fraunhofer. 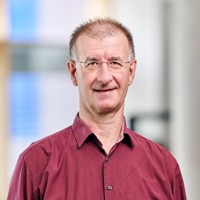