Images out of nowhere

Tumor or no tumor – to decide, we need to have a close look at the tissue sample. Light doesn't just make hidden things visible, however; it also damages or destroys living cells. Little more than a snapshot is currently possible. Fraunhofer scientists have now developed a new method allowing light-sensitive samples to be observed for a longer time period with higher resolution.

The trick: The researchers use a different beam of light to examine the object than would be used in camera imaging. This is made possible by quantum technology. Dr. Markus Gräfe, Head of the Working Group on Quantum-Enhanced Imaging at the Fraunhofer IOF, explains:

“We irradiate a non-linear crystal with a laser. As a result of the interaction with the crystal structure, the laser beam divides into two entangled twin beams with different wavelengths. Beam A is directed at the sample. Beam B creates the image – even though it was never pointed at the sample. The photon pairs created in the crystal and divided remain connected to one another through quantum mechanics. Thus, beam B astonishingly carries in it the same information as beam A. We used to call this ‘spooky action at a distance’ because this effect was inconsistent with our everyday experiences.”

This method could represent a quantum leap, particularly in medical imaging. Living cell cultures and tissues are sensitive to light and are quickly damaged or completely destroyed under a microscope. Cell processes lasting several minutes or even hours have been impossible or at least very difficult to observe until now. “With our method, a conservative examination is possible because the sample doesn't need to be strained with a lot of unnecessary light. We can record the image in the visible wavelength range, for which affordable, high-resolution and considerably more sensitive cameras exist,” says Gräfe. Thanks to this, the exposure time could be shortened considerably. Biological events can therefore be observed under the microscope for much longer and in real time.

Up until now, Gräfe and his team have worked exclusively in the visible light range. Their goal, however, is to soon tap into other wavelength ranges like infrared or UV rays.

The new method is based on previous work by scientists at the Institute for Quantum Optics and Quantum Information in Vienna that Gräfe and his team work closely with. “Our colleagues in Vienna managed to show that this principle worked five years ago. We were able to considerably simplify the technology and make it more stable. We saved a lot of optical components, resulting in a small, easily transportable device.”

To expand the method into additional wavelength ranges, Gräfe is currently experimenting with different crystal materials. This is necessary because each crystal can only produce photon pairs in specific wavelength ranges. This is why the crystal used until now, consisting of periodically poled KTP, is unsuitable for higher frequencies like UV or X-rays.

If it became possible to tap into other wavelengths, this would be of interest not only in the medical domain, but also for substance analysis. “In the mid-infrared or the terahertz range, for example, we could detect explosive substances – and much more efficiently than with the current method.”

The Fraunhofer IOF will present the first quantum images at the LASER World of Photonics 2019 fair, at the Fraunhofer joint stand in Hall B3, stand number 335. 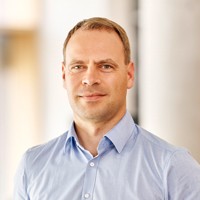